Chris had heard about this great soy cheese made in Illinois called Teese. It's natural, not made with isolated/hydrolyzed soy protein or autolyzed yeast extract or other processed stuff like some vegan alternatives and well, processed food in general. We found it's sold at Vegan Essentials, which happens to be on the west side of the Milwaukee area. We finally made it there a few weeks ago. It's really not set up for on-site shopping, definitely more of a warehouse and online business. But the staff was friendly and let us take our time perusing the aisles. We picked up some stuff we didn't really need, as often happens when grocery shopping, like some candy and such that we have yet to try.

Anyway, so we felt the best experiment with the faux cheese would be on a pizza. Instead of making our own crust this time, we bought a millet flour and flax seed crust by Sami's that we found at a natural food store near Chris's grandparents' house. 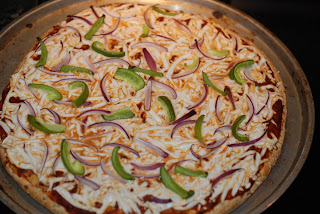 It was fun to experiment, but I wish I had put more toppings on. Compared to our first attempt with another vegan cheese a while back, this was almost creepily cowmilk-like both in texture and smell. We actually made a white pizza over this past weekend with a thin brown rice/potato crust which I topped sufficiently this time- half jalapenos & crimini mushrooms, half spinach & artichokes, red onion on the whole thing. It hit the spot, but I didn't want to interrupt the enjoyment to take pictures. It's refreshing and invigorating to make all this crazy food that it usually so based on dairy. I can't explain the difference I feel in my body without the congestion that stuff causes. It's liberating.

I had been wanting to try making a new version of my mom's hamburger pie (aka shepard or shepherd's pie). Well I succeeded last week! My first attempt at vegan potatoes was interesting, and a good starting point. I baked the potatoes as opposed to boiling them when I was using the oven for something else anyway, scooped out the insides, and added coconut milk, lots of fresh garlic, and a little cayenne. For the pie, I used tomato sauce, ratatouille seasoning from the Spice House, lots of onion and mixed vegetables- corn, lima beans, carrot, peas, and green beans. I kept adding more seasoning because it tasted too much like just tomato sauce, but after broiling it to melt the Teese, it was really strong. Less ratatouille next time. T'was yummy though. And I'll be playing with how to make the mashed potatoes differently too. 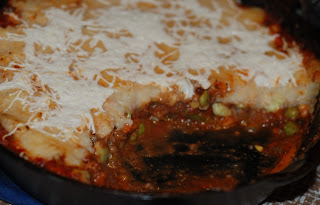