Last weekend Chris made a suggestion to get us out of a food rut. Each week, revamp an old favorite recipe and also try at least one new recipe. I think we did at least 2 of each this time around. Maybe that will count for this week too if we don't have time to be as creative again.

I had bought a head of orange cauliflower, steamed it, and we had the basis for several quick meals. 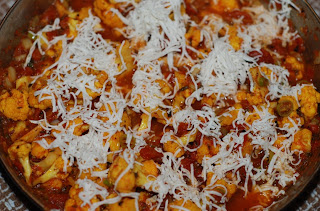 In college, my mom gave me a "one-step" seasoning and recipe for chicken breasts. Chris, the seasoning expert, has long since mixed the seasoning with our own spices. Per the recipe, chicken (or in our case, cauliflower) is cooked in olive oil with onions and peppers, add some white wine, spices, a can of tomatoes, and simmer. Top with teese.

I love Muir Glen and we discovered they now have No Salt Fire Roasted Tomatoes! They read our minds. I was going to write to them and suggest/plead that they make them without added salt. It's not on their website yet but I've seen it in two stores now, so I will vote with my dollars to promote their wonderful product. The fire-roasted flavor is so good in anything Italian. They will be featured in future posts, I can assure you. 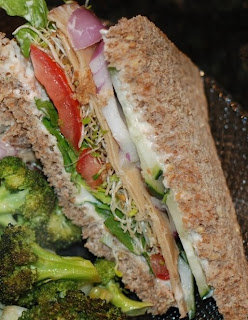 This wasn't a recipe, but I made the most amazing sandwich. In our curious moments at the grocery store, we have bought fake meats occasionally and then hardly use them. Having smoked Tofurky in the fridge, I decided a sandwich and broccoli sounded delicious the other day. So it included sprouted flourless bread, 2 almost insignificant slices of Tofurky, sliced red onion, tomatoes, and cucumber, alfalfa sprouts, and romaine lettuce with Nayonaise. The picture makes me want another. Oh, and to make it more "turkey club" like Chris put a little liquid smoke on the cucumber to make it resemble bacon, and it worked, haha. And I roasted broccoli with a bunch of lemon juice, garlic, and olive oil.

It's amazing how my tastes have changed after eating this way for the past 6 months. I get major cravings for vegetables. So late-night snacks will often be mixed vegetables of some sort.

This week it was asparagus with red onion and Borsari herb and salt seasoning.

Another night I made myself mushrooms with poblano and jalapeno peppers, onion, and mexican oregano.


We also made a couple new Indian dishes and revamped General Tso's but Chris will blog about those since he's the ethnic chef.
Posted by Joy at 11:56 AM