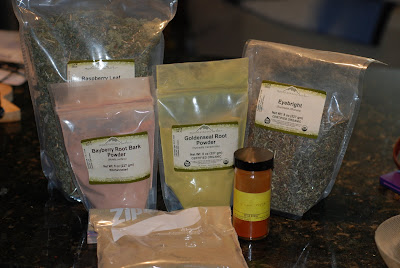 Well, time passes more quickly than I can keep up with and so this is somewhat of a lumped post. A week ago, I decided to try my skills at mixing up an herbal formula (using mostly organic herbs, some wildcrafted) at a massive savings over the premixed type. I must say, after taking the capsules for a week this stuff is pretty potent. Dr. Christopher's Herbal Eyebright, which I am using to improve my eyesight. I hope to make tincture soon (alcohol extract) and at the cost of the herbs plus the ease over stuffing them in capsules, I'll probably take more of it then, in addition to using it for eyewash.

The tube amplifier is happily singing again after a mishap with some vintage tubes I was dying to try. I may throw a few meters on it when I try them again, to make sure the bias doesn't drift and cause trouble. One of the tubes may be going gassy (losing vacuum), which is a shame since they sell for $$$$$.


On the food front, we had a nice breakfast yesterday morning - Amy's "Sausage" which was delicious. All the flavor, without the meat! Add a side of unpeeled red potato hash browns with onions and that rounds out the plate. Top with some cayenne and it just can't get any better.

Today, we hit the kitchen hard for the first time in a while - gourmet inspiration and future preparation. We're starting to get back into the swing of things, inventing and trying new recipes. 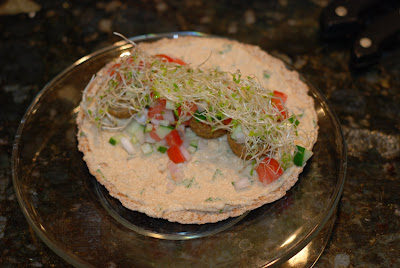 First was Lemon/Garlic Tahini sauce, followed by Falafel, Mixed Vegetable Pakoras, and Poori. The Tahini is used on our falafel wraps (in sprouted grain tortillas). This is topped with a mixture of cucumber, tomato, and red onion. This is then finished off by a large helping of alfalfa sprouts. Crunchy, creamy, fresh, and earthy. There is literally a few cups of the tahini sauce, about 40 falafal, countless pakora, and a few poori (fried, Indian whole wheat bread). Enough for a buffet or a huge party, but some will be frozen for later enjoyment - it beats the flavor and junk in store bought food. The Indian grocery is frustrating since most of the breads aren't whole
grain and we aren't really supposed to have much bread unless sprouted. Though every now and then a piece is good with a flavorful Indian meal. Until next time, enjoy the pictures and remember that healthy food CAN taste good! 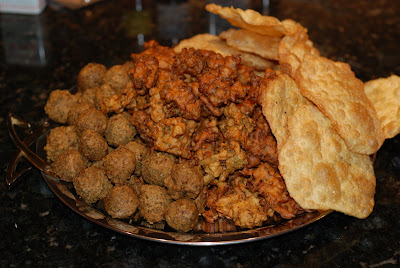